The anniversary 2017’s are already highly sought after coins – this special gold gilded limited 5000 issue is sure to be highly desired, Worldwide.

The 2017 1 oz South African Silver Krugerrand Coins are a premium first year – 50th Anniversary issue, with this special Gold gilded version limited to 5000 coins it is sure to be highly desired by collectors of the iconic Krugerrand bullion coins.

These 2017 South African Silver Krugerrands feature a beautiful 24-karat gold layering. Known as a gilded finish, these coins combine the brilliance of silver with a thin layer of pure gold to bring together the two most favored precious metals.

On the reverse of all South African Silver Krugerrand coins is the image of a Springbok antelope. Both sides of the coin have engravings in both English and the native Afrikaans spoken by tribes and ethnic groups in South Africa. The designs on the modern obverse and reverse were refined in 1984, with Otto Schultz revitalizing Kruger’s portrait and Coert Steynberg reimagining the Springbok antelope.

The obverse of the Silver Krugerrand features the left-profile portrait of Paul Kruger. Known as Stephanus Johannes Paulus Kruger, he was the most dominant political and military figure of 19th-century South Africa. He led the Boer cause for a free and independent South African republic.

There are no reviews yet. 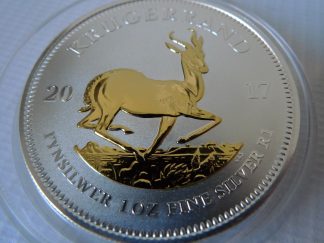